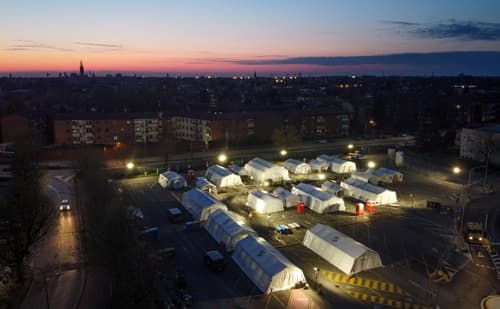 Part 1: What have we learned?

For several weeks now, the Spaniel and I have been poring over charts, analyzing the data, and perusing commentary from multiple reliable sources (and occasional not-so-reliable ones) in order to provide you, our esteemed fan base, with trustworthy evidence-based guidance for what the future brings. Discretion is often the better part of valor, and those who strike first usually miss. We thought about issuing our predictions weeks ago. We were wise not to.

In mid-March, there was cause for optimism that COVID was “no worse than the flu”. Well, that rather depends on which flu one has in mind. The 1918 Spanish flu was devastating. Indeed, le Spaniel et moi were hopeful that COVID would follow a more benign course, comparable to a severe seasonal flu. One early indicator would be Italy. Annual flu deaths in Italy run about 8,000. By March 26, the total COVID deaths in Italy crossed that threshold and continued to rise. They are now slowly approaching 30,000. Could Italy be near the peak? Four times 8,000 would be 32,000. Interestingly, one writer inferred from an early German antibody screen that the fatality rate would be about four times deadlier than the seasonal flu.

COVID also differs from the flu in two key respects. First, it is much more contagious. It is transmitted more easily between persons, leading to a much more rapid spread. This was reflected in the speedy dissemination through nations and around the globe, with exponential growth rates in both infections and fatalities. The second difference has been the degree to which COVID can be transmitted by asymptomatic carriers.

One of the more curious aspects to this pandemic we have learned is the surprising frequency of asymptomatic infections. This is a double-edged sword. On the one side, it means the disease is not as lethal as raw numbers might suggest. On the other side, it means that containment is much more difficult.

After several months of study, we are closing in on answers to some of the most critical questions.

What is the real mortality rate?

Many casual observers have focused on the case fatality rate (CFR) a simple – and simplistic – ratio of recorded deaths to recorded cases. This results in a wide range of estimates, from 0.09% (Singapore) to 15.7% (Belgium). This number is wildly misleading for a host of reasons, but especially because most recorded cases and even more deaths were among the elderly. In Singapore, almost all of the cases have been among young migrant workers living in dormitories, among whom the fatality rate is exceedingly low. One thing that we knew early on was that the fatality rate was highly age-dependent, from nearly zero among those under 20 to 15% or higher among the most elderly:

It is important to emphasize that the CFR’s in the chart above are considering only diagnosed, symptomatic infections, who were more likely to be severely ill or hospitalized. Much more relevant is the infection fatality rate (IFR). This is the actual chance of someone dying from infection with the virus. This number allows us to predict the risk for an individual who is infected, but also can predict the impact on a large population. Even among diagnosed cases, the IFR varies wildly with age and is extremely low among those younger than 40. However, to get an accurate IFR, we need to know how many have actually been infected, so…

How many have been infected?

Officially, there are now over 3.6 million cases worldwide (May 4) and over 1.2 million in the US alone. This number is almost certainly low due to limited test availability, false negative test results, and – especially – the very high rate of asymptomatic infections.

We knew from the outset that many infections were asymptomatic. This is important for several reasons. First, the disease is not as lethal on a percentage basis if there is a significantly large cohort that gets infected without falling ill. Second, the disease is extremely difficult to contain if it can be transmitted by apparently healthy people. Third, it raises the tantalizing prospect that so-called “herd immunity” could some sooner than many expect. “Herd immunity” is a poor choice of words, since we cannot yet prove that recovering from the disease actually confers immunity. Nonetheless, every epidemic eventually burns out or we’d have gone extinct eons ago.

The first clues of asymptomatic infection came from studies in China and the cruise ship Diamond Princess, resulting in estimates of 25-50%. That would mean for every 100 known infections, there were 33 to 100 unknown ones.

Later studies using a variety of methods pointed to even higher rates. In late March, a multinational team of researchers applied mathematical modeling to internet usage to trace the spread of COVID in China. Its spread could only be explained if 86% of the early cases were “undocumented” – meaning, unsuspected and undiagnosed. The best explanation would be that that were minimally or asymptomatic. If true, there might be 7 asymptomatic infections for every symptomatic one.

This was mirrored by a second study in early April that used a completely different approach. In a letter to the New England Journal of Medicine, some New York obstetricians reported on the testing of 215 consecutive inpatients tested for coronavirus. Thirty-three tested positive; only four (12%) were symptomatic. Asymptomatics outnumbered symptomatics again, by seven to one.

By late April, several sites were reporting initial results of random antibody testing that could indicate how many had been infected. While there have been legitimate concerns about both the accuracy of the tests and the methodology of the studies, they again point to many asymptomatic infections. On the day the results were released (April 23), Governor Cuomo surmised that as many as 2.7 million New Yorkers had already been infected. That was over 10 times the number of confirmed cases on that date – and antibodies are a lagging indicator. It takes up to two weeks for the antibodies to become detectable. The actual ratio of asymptomatic to symptomatic could be even higher.

Take the age-adjusted case fatality rates from the prior illustration and apply them to the US population. If no cases were asymptomatic and everyone fell obviously ill – an impossible 100% – we would expect an overall IFR of 1.15% and a staggering 3.8 million deaths. But if seven out of eight are asymptomatic, the IFR drops to 0.14% causing 474,000 deaths, still assuming 100% get infected. A more realistic assumption would be an infection rate of around 60%, bringing the total mortality down to about 284,000. That’s with no effective treatment and no public precautions. We’re now a quarter of the way there nationally. The state-wide death rate in NY is closing in on 0.14%. It could end up exceeding that but appears quite unlikely to go much higher.

What has been the disease trajectory in the US and other countries?

The European states that were hit earliest and hardest showed a rapid rise in cases that peaked in a few weeks but then steadily declined. This was most notable in Spain, Netherlands, and Italy, where the nationwide death rates reached around 500 per million. France and Belgium followed similar trajectories shortly afterwards.

Because of this, most expected the US to follow a similar path. We appeared to hit a peak of 34,517 cases on April 4 and that record stood for 20 days, with slowly declining numbers. However, daily deaths hit a new high of 2683 on April 21 and on April 24 new cases rebounded with a new daily record of 38,598:

Why did the US not behave like Europe? Perhaps because the United States is more like 50 individual countries, with profound local disparities. When cases in the US were rising rapidly, most of those were concentrated in the regions around New York City, Detroit, and New Orleans. These regions actually did follow the expected trajectory. However, as cases began to fall in these areas, they began to rise in others. As a result, total US cases and deaths have remained virtually flat for three weeks.

A second compelling fact to consider is that the death rates in Europe only began to show marked declines after per capita mortality hit a certain level. The per capita mortality in the US remains less than 1/3 that of Belgium, less than ½ that of Spain, Italy, and the UK, and almost ½ that of France. Yet on a local level, the statewide mortality of New York (0.13%) is higher than any European state. After hitting such a high level, the daily death rate in New York City has been dropping even faster:

There has been surprisingly little correlation between public containment strategies and the local course of the epidemic. In Illinois – among the first to issue a stay-at-home decree (March 21) – cases are increasing at an increasing rate.

In Florida, one of the last (April 3) to issue a state-wide decree, new cases have trended downward for a month:

Most cities and states never saw the surge in patients that had been expected. While personal protective equipment has been in short supply – truly a serious problem – there was never a ventilator shortage. The one metropolitan area that saw huge volumes of patients over a very short period of time – New York City – never came close to exhausting the reserve capacity that had been mobilized.

In summary, we have learned that COVID is highly infectious, and moderately lethal with an infection fatality rate that may be about four times worse than the common flu, or a little higher. All signs point to a very high rate of asymptomatic infections. The upside to that is that it remains much less deadly than predicted initially. The downside is that makes it much more difficult to track and contain.

In our next installment, what does all this signify for the future and what’s the endgame? Some of the nation’s most experienced analysts are beginning to reach a consensus on this. Stay tuned, sign up for our notifications (top right) and we’ll take a look in the coming weeks. In the meantime, go take your dog for another walk.