Home / Book Review: The State of the Evangelical Mind: Reflections on the Past, Prospects for the Future 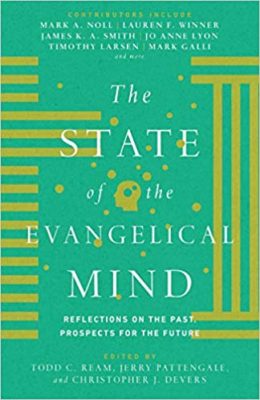 The State of the Evangelical Mind

Reflections on the Past, Prospects for the Future

This present work consists of an Introduction, six stand-alone essays, and a conclusion representing at least 8 distinctive viewpoints regarding “The State of the Evangelical Mind”. An ambitious undertaking for so short a work, considering 1) no one agrees on the definition of Evangelical, and 2) no research methodology or data exists to support objective, quantitative analysis. The analysis is purely subjective.

Introduction: “The state of the Evangelical Mind: tales of prosperity and peril” written by the book’s editors. They attempt to define the term and offer a broad overview of general trends in Evangelicalism since Noll’s original book.
1. “Evangelical intellectual life: reflections on the past” by Noll recaps trends over the last 24 years focusing on the Reformed Journal, Institute for the Study of American Evangelicals, the Pew Evangelical Scholars Program, and Books & Culture. All are now defunct but had productive runs. He carries us to the present with reference to a handful of Evangelicals in science and academia that warrant Mr. Noll’s notice.
3. “University Ministry and the Evangelical Mind” by Mahan and Smedley. Two individual essays from individuals long connected with Cru and InterVarsity, large campus ministries with an academic focus discipling future leaders. This is one of the better sections, and most relevant to the actual title.
4. “John Henry Newman’s ‘The idea of a university‘ and Christian Colleges in the twenty-first century” by Timothy Larson. A very good essay on the importance and value of increasing in general knowledge and the neglected value of theology. Toward the end he writes “We must never fudge the evidence or rig the argument in order to save a doctrinal claim from embarrassment. All truth is God’s truth.”
5. “Contemplative posture and Christ-adapted eyes: teaching and thinking in Christian Seminaries” by Lauren Winner. A perspective on Evangelical seminaries through the eyes of a female Episcopal priest. Heavy on trade jargon (“extraction”, “instrumentalism”), she contributes little to the theme of the book. Meh.
6. “The future is catholic: the next scandal for the Evangelical Mind” by James Smith. In a mostly insightful commentary, the author praises current projects like the Center for Christian Thought at Biola. He makes a valid point that with the proliferation of non-denominational churches training standards for leaders has diminished. Calls for restoration of denominational creeds and more intermediaries to communicate work of Evangelical scholars to the laity are good advice. His credibility is diminished by an off topic political rant over Donald Trump and Evangelical support. Only 16% of white Evangelicals voted for Hillary Clinton (down from the 21% who voted for Obama in 2012), yet strangely Smith faults the voters rather than the candidate. To blame it on the voters is insulting. To insinuate it has anything remotely to do with their intelligence is delusional.

Conclusion: “The ongoing challenge of the evangelical mind” by Mark Galli. Galli is Editor in Chief of Christianity Today and this essay summarizes his recent editorial posts on the CT website. Good, balanced thoughtful analysis.

For those with an interest in the subject, this collection of different opinions provides some useful perspective filtered through various biases. It is notable for its failure to mention many prominent figures and ministries actively  or recently involved in Evangelical intellectual life (e.g. Tim Keller, William Lane Craig, Ravi Zacharias, Hugh Ross, or the late R. C. Sproul and Chuck Colson).