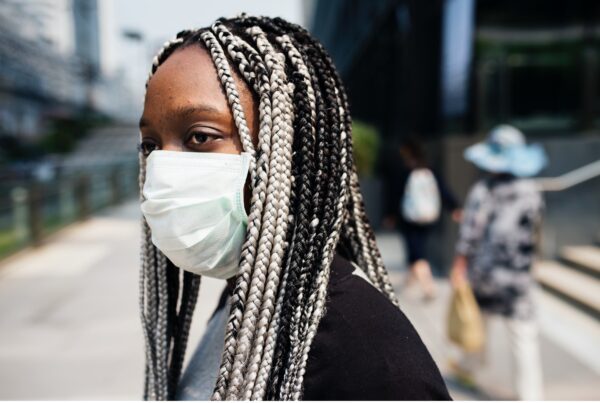 This could be the good news event of the year. Why is no one talking about it? COVID infections in the US have been plunging over the last 3 weeks.

The world is exhausted. Over a year after the SARS-Coronavirus-2 pandemic escaped China and infected the world, we are lonely, frustrated, divided, discouraged, and downright irritable. According to the prevailing narrative, the epidemic is not under control. In one of the singular triumphs of the administrations of “bad boys” Prime Minister Boris Johnson and former US President Donald Trump, multiple vaccines have been developed, approved, manufactured, and released to the public. Yet the vaccine rollouts have been fraught with multiple allegations of inequity and inefficiency – some valid, some perhaps less so. The lockdowns, school closures, and restrictions threaten to continue on until – perhaps sometime in the summer – enough people have been vaccinated to achieve “herd immunity”.

What is herd immunity? How will we know when we’ve reached it?

Well, for starters, herd immunity is not a number. Early in the epidemic the opinion emerged that herd immunity from COVID would require infection or inoculation of 70% of the population, and that number has stuck like old gum to a school desk. But no nobody really knew or could know. Herd immunity is not a number but a state. “Herd immunity” – as defined by the Journal of the American Medical Association – “refers to the protection of susceptible individuals against an infection when a sufficiently large proportion of immune individuals exist in a population. In other words, herd immunity is the inability of infected individuals to propagate an epidemic outbreak due to lack of contact with sufficient numbers of susceptible individuals. It stems from the individual immunity that may be gained through natural infection or through vaccination.” (I explained how this worked last May in “Covidistan, Coronacita, and Carnivals”).

That might require 70% of the population, or 99%, or something much lower. The only certain way of knowing we’ve achieved herd immunity is when it happens. What might that look like? We’ve achieved it when local transmission rates are low, and either stable or dropping in the absence of non-pharmacologic intervention (i.e., masks and social distancing).

New cases in the US peaked at 308,182 on January 8 but by January 31 had plunged almost two-thirds, down to 110, 906. The more statistically meaningful rolling average, which smooths out reporting fluctuations, peaked on January 11 and has dropped almost 50% in three weeks. The downslope, indicating the rapidity of decline, is dramatically steeper than the drop-off after the two earlier peaks. This is even more significant considering the fact that the earlier two declines were achieved by lockdowns and other interventions, while the present decline is occurring in an environment of loosening restrictions across most locales.

The most reliable measure – nationwide hospitalizations – confirms this trend. Since patients typically do not require hospitalization until several days after onset, this tends to be a lagging indicator. Hospitalizations nationwide peaked on January 6 at 132,474 and have dropped every consecutive day since January 12. As of February 3 hospital inpatients were down to 91,440, a 30% drop. The rate of decline, averaging 1.5%/day, is far more rapid than similar declines in the late spring and late summer.

A current chart from the COVID tracking project shows declining hospitalizations in 48 of the 50 US States. (In the two states showing an increase – VT and MT – the actual numbers are very, very low).

Why are cases dropping so rapidly? The decline in late spring occurred when almost the entire nation was shut down. The decline in late summer coincided with reimposition of tighter restrictions in some of the hardest hit regions. By early January some hospitals seemed to be on the brink of overload and local restrictions were reimposed, mostly in California and New York. But that cannot account for a nationwide phenomenon. The hypothesis that we are fast approaching herd immunity, as a result of widespread infection now supplemented by vaccination, has considerable merit.

Officially, about 8% of the US population has had COVID. Another 8% have now been vaccinated. Assuming the groups do not overlap – they probably do – only 16% of the population is immune. That’s a long way from the “magic” 70% or any other conservative estimate. So how could it even be possible? Two factors come into play. First, the real number of US cases is certainly much higher than 8%. The CDC estimated that by the end of December, 83.1 million US citizens had been infected. We added an additional 7 million official cases in January. If the undocumented cases in January were anywhere close to the same level as last year, we are now well over 100 million cases, or one-third of the US population. If we then add in the vaccinated group, about 40% of the US population should now be immune according to the CDC data and methodology.

The operating assumption since the onset of the pandemic was that no one was immune to COVID-19 and thus everyone was vulnerable. It was indeed a new virus. This Boolean distinction assumed either you were immune or you weren’t, and there was no middle ground. However, we have had experience with other coronaviruses, and evidence continued to accumulate over the course of 2020 of partial immunity against SARS-Cov-2 thanks to a component of our immune system known as T-cells. As many as 50% of persons tested had T-cells that could recognize and respond to the COVID virus before the epidemic even began. The scientific community has been circumspect regarding the significance of this fact, uncertain whether or not it conferred any protection in those whose T-cells could respond to SARS-Cov2. Last summer, internationally respected epidemiologists speculated that because of pre-existing resistance, herd immunity could kick in with an infection rate possibly as low as 20%. The most optimistic scenario did not pan out, but it remains too soon to rule out any number between the current infection rate of about 30% and the ultimate limit of 100%.

Our experience over the last year strongly suggests some people are resistant to COVID. There are many, many cases of individuals exposed to the virus who never tested positive, including my own family. My son turned positive in early October, having certainly acquired it from school. My wife and I never became symptomatic, and I voluntarily had myself PCR-tested a week later. I remained negative. My experience has been the experience of most. A large meta-analysis published by JAMA in December found that the “secondary attack rate” in multi-person households was a hair under 17%. This means that 83% of people living with an infected patient did not contract the illness. This is quite unexpected for something as infectious as COVID, but not at all surprising if some are naturally resistant. I quite happily signed up for the Pfizer vaccine when it became available, but thought it interesting that I had already been exposed to a symptomatic household member and did not contract it. Was it a case of pre-existing resistance? I’ll never know.

The trend is definitely encouraging. Would there be a fourth wave if we reopened now? Maybe, maybe not, but if there were, I believe it would be modest. It’s debatable how much impact public policy measures are having on transmission since most transmission occurs in private gatherings. Probably some. (Some areas have been more aggressive than others in suppressing the spread; the same areas remain most vulnerable to a resurgence.) But the massive nationwide breakout of infections that began in October was exactly what mask ordinances and bar closures were supposed to prevent. Perhaps without such measures the hospitals really would have been overwhelmed. That’s entirely possible; we’ll never know. Most in the media – at least those who’ve even noticed – are sticking with the narrative that it’s all driven by behavior, and numbers are only dropping now because people are finally “scared”. That’s a valid hypothesis; I simply see no evidence for it.

I am not making predictions or scientific pronouncements, simply calling attention to an encouraging trend. There is good reason now for hope and encouragement. More will perish before this is over, and it may never completely go away. Please get your vaccination as soon as you are able. And please be patient and respectful toward one another.

“Therefore, as the elect of God, holy and beloved, put on tender mercies, kindness, humility, meekness, longsuffering; bearing with one another, and forgiving one another, if anyone has a complaint against another; even as Christ forgave you, so you also must do.”