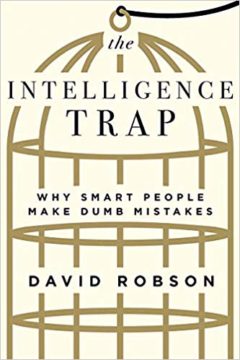 Western society reveres intelligence, or at least pretends to. A leading political figure boasts he’s “a very stable genius” – which, presumably, is superior to an unstable one. Yet no one stops to ask, “does it matter?” According to this fresh and fascinating analysis from British science writer David Robson, probably not. In fact, it could be a liability.

Anecdotal examples abound of brilliant people who believe crazy things. Arthur Conan Doyle, creator of the ruthlessly logical Sherlock Holmes, clung to a naive but unshakeable faith in spiritualism and fairies. Nobel prize winner Kary Mullis recounts his abduction by a glowing alien raccoon, when not engaged promoting astrology and AIDS denialism. The name most synonymous with genius – Albert Einstein – saw the hope of mankind in Vladimir Lenin and frittered away the final decades of his life stubbornly rejecting quantum theory. The tendency of Nobel prize winners to go of the rails is so commonplace that science writers coined “Nobel disease” as a term of derision.

Among the higher ranks of intelligentsia, we learn that:

The third section of the book zeroes in on sound practices of learning and how principles like curiosity, conscientiousness, and emotional intelligence are at least as, if not more, important than intellectual intelligence. Robson relates a number of evidence-based practices shown to facilitate learning – material that should be of keen interest to teachers and learners alike.