Return of the God Hypothesis – Review

Return of the God Hypothesis – Review 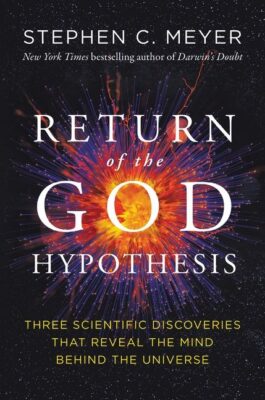 “The secularization of America probably won’t reverse unless the intelligentsia gets religion,” writes Douthat. Nor is he sanguine for the prospects of that occurring. Douthat postulates two primary obstacles. First, “a moral vision that regards emancipated, self-directed choice as essential to human freedom and the good life.” Second, an entrenched anti-supernaturalism:

“The average Ivy League professor, management consultant or Google engineer is not necessarily a strict materialist, but they have all been trained in a kind of scientism, which regards strong religious belief as fundamentally anti-rational, miracles as superstition, the idea of a personal God as so much wishful thinking.”


One eminent thinker and scholar who has pushed back against that anti-supernaturalism is Dr. Stephen C. Meyer, geophysicist, philosopher, professor, and author whose 1991 doctoral thesis at Cambridge University examined the status of origin-of-life research. Meyer is best known as the author of “Signature in the Cell: DNA and the evidence for intelligent design” (2009) and “Darwin’s Doubt: the explosive origin of animal life and the case for intelligent design” (2013). In 2002 he left his tenured position at Whitworth College to become full-time director of the Center for Science and Culture, part of the Discovery Institute.

Meyer’s newest contribution to the apologetic realm is “Return of the God Hypothesis: Three scientific discoveries that reveal the mind behind the Universe”, released on March 30, 2021.[1] In this extensively researched, meticulously documented 450-page tome, Dr. Meyer zeroes in on three of the most challenging questions in the science of origins:

2) What accounts for the incredible fine-tuning in physical laws and the parameters of early expansion necessary for matter, stars, planets, and life to even be possible?

3) What explains the origin of life and the information encoded within DNA necessary for any form of life, particularly the highly advanced forms which appeared “suddenly” (on a geological timescale) in the Cambrian explosion (ca. 540 Mya)?

In each case, Meyer demonstrates quite clearly – and accurately – that there is no viable natural explanation. After explaining the current state of science on these questions, Meyer frames them within the much broader context of epistemology, logic, metaphysics, Bayesian analysis, and information theory to conclude that among all possible options, Theism offers the most probable, coherent, and intellectually satisfying answer to otherwise intractable mysteries.

The science and doctrines of origins have been a hotbed of controversy for many decades. Both emotions and overconfidence run high and thoughtful dialogue is far too rare. Dr. Meyer is no hard-charging polemicist. Almost to a fault, he approaches his critics with gentleness and respect and takes their arguments seriously. Indeed, one might frame his new work as an extended response to the most salient criticisms of the last several years.

So what are those criticisms? Well, according to Wikipedia “Intelligent design (ID) is a pseudoscientific argument for the existence of God” – revealing mostly an intense, if unsophisticated, ideological bias among editors at Wikipedia who rule with an iron mouse. Nonetheless, Meyer thoroughly and effectively disassembles that characterization with chapter upon chapter of careful reasoning and irrefutable evidence.

More thoughtful criticisms come from the scientists affiliated with BioLogos, a group founded by Francis Collins who identify themselves as “evolutionary creationists”. They have been frequently critical of the Discovery Institute and Intelligent Design (ID) for reasons that are more philosophical than scientific.[2] To understand Meyer’s argument and why he frames it as he does, it helps to understand debates of the last decade in which Meyer has been a central figure. BioLogos figures prominently in that story.

In his autobiographical testimony, “The Language of God”, the current NIH director and former head of the human genome project describes his coming to faith after being deeply influenced by the “moral argument” for God, famously articulated by C. S. Lewis in “Mere Christianity”. Yet in Chapter 3, “The Origins of the Universe”, Dr. Collins specifically invokes Meyer’s first two arguments as convincing scientific evidence in favor of – if not completely proving – God.[3] BioLogos mostly takes issue when Meyer steps into biology, not surprising since that was the focus of Meyer’s first two books and they primarily identify as Christians who accept undirected evolution as sufficient to explain all of life’s complexity.

On the matter of design in biology, it is not as though Meyer and ID proponents have been formally refuted. That would be easy if the evidence exists. One must simply account for the assembly of cells out of inorganic precursors, and the origin of biological information encoded in DNA, and the case would be closed. (For anyone feeling up to the task, here is a $10,000,000 prize with your name on it). The ID movement is famous for emphasizing the presence of “irreducible complexity” in biological structures. This has been a source of much contention. In some instances, their examples have not been so compelling as initially thought, but those disputes amount to little more than quibbling over examples, not the underlying principles. BioLogos has been very critical of the idea of irreducible complexity, but in “Return of the God Hypothesis” it is conspicuous mostly for its absence apart from the origin-of-life discussion.

Another objection from the BioLogos community is that ID commits a “God of the gaps” fallacy in citing shortcomings of evolution as evidence for God. (More than one observer has noted that the same objection could be raised against the moral and cosmological arguments preferred by BioLogos). Obviously sensitive to that accusation, Meyer dedicates an entire chapter (“Acts of God or God of the Gaps?) to the challenge. In this Meyer acquits himself admirably, though more could be said. Given the current state of origin-of-life research, the word “gap” seems inadequate to describe a vast, impenetrable expanse of darkness. In “The End of Science” agnostic science writer John Horgan identified the origin of life as a problem that likely never would be solved.[4] Twenty years later, Horgan remains just as doubtful.

[This raises an interesting philosophical question, though. Suppose one had to choose theism versus atheism on the origin of life alone. Would you bet your eternal destiny, or that of someone you care for, on the possibility that someday, somehow, the origin of life will be explained? How do you prove a negative? How long would it take to prove it’s unsolvable? Another 20 years? One hundred years? A thousand years? Who can afford to wait? The only rational approach is to decide on what we know now, not what we might or might not know in the future.]

Now, BioLogos is concerned that the faith of some is shattered when it is based on particular “gaps” that ultimately are explained. Such would be a shallow faith indeed. They are quite correct that the faith of many has been shipwrecked on the rocks of science – sometimes by bad science, often just because they were taught very bad science. But there’s little or no evidence that anyone’s faith has been undermined by an approach resembling that of Meyer. (It was the design argument, especially in biology, that convinced me of God’s reality back when I was young. Obviously, telling me I was duped into my faith is going to be a hard sell).

In principle, BioLogos objects to seeing design in biology and invoking that as evidence for God, as Meyer consistently has done. Yet sometimes their own position doesn’t seem fully thought out. BioLogos scientists unabashedly declare themselves as believers in creation. While they explicitly reject Deism and affirm God’s subsequent intervention in human affairs and incarnation in Christ, their view of creation is such that undirected evolution is sufficient to explain the complexity and diversity of life – and ultimate appearance of humans:

“Once evolution got underway, no special supernatural intervention was required”

Meyer notes that this necessarily imposes teleology upon evolution – a principle decisively rejected by almost all secular evolutionary biologists and for which there is no compelling evidence. [Although many Christians think evolution is unacceptable in any form, in practice our disagreements are really more over the scope of evolution rather than its existence. Here, for example.]

Denis Lamoureux of St Joseph’s College in Alberta holds Ph.D.’s in both theology and evolutionary biology and is credited with coining the term “evolutionary creation” (EC) favored by BioLogos. Officially he is not a part of the organization, but there is a definite symbiosis and mutual respect. As Meyer notes, Lamoureux argued that God’s plan for creating life and humans was embedded within the design of the universe from the instant of creation.

Elsewhere, Lamoureux has written: “The Creator loaded into the Big Bang the plan and capability for the cosmos and living organisms, including humans, to evolve over 10-15 billion years.”[5] According to Lamoureux, “design is evident in the finely-tuned physical laws and initial conditions necessary for the evolution of the cosmos through the Big Bang, and design is also apparent in the biological processes necessary for life to evolve, including humans with their incredibly complex brains.” [italics added] Repeatedly, he affirms the principle (and terminology) of “intelligent design” in nature reflecting the handiwork of a Creator.

Meyer fairly points out the difficulty in framing this position as more scientifically sound or palatable than some other version of evolution in which God is actively involved. To postulate that the information for life up to and including humans was embedded in the original design of the cosmos goes far beyond anything within the realm of known science. There is no known natural mechanism by which that information could have been encoded or transmitted. Meyer is silent regarding the actual scope of evolution as he understands it. But the concept of progressive creation vigorously opposed by the BioLogos community seems no less scientific or more miraculous than their proposed alternative. A crude analogy would be firing a pistol and hitting a dime on the far side of the universe. In the BioLogos view, God takes one shot and hits the target, whereas a progressive view would allow for mid-trajectory adjustments. Either is possible. The latter is less demanding. (Of course, my analogy doesn’t account for the additional problem of how information was encoded and transmitted). Or, to look at it another way, a progressive view has God intervening in known scientific processes, whereas the EC view postulates unknown scientific processes for evolution to achieve its intended result without further intervention.

Coming from a different place on the continuum, the Old-Earth Creationist ministry Reasons to Believe has criticized Meyer and the Discovery Institute for failing to name the designer and consequently having little apologetic or evangelistic impact.[6] This objection seems to be resolved decisively in “Return of the God Hypothesis”, as the ultimate theme and purpose of the work is to show that the designer is a personal and benevolent deity who is actively involved in the course of nature and human affairs.

Dr. Meyer is an exemplary writer and scholar and his new volume is a masterwork of apologetics. It is not a light read and is definitely targeted to the scientific and scholarly crowd – Douthat’s “Meritocracy” referenced in the opening. The case should be compelling to agnostics and skeptics who are looking for honest arguments based on sound science and not emotionally predisposed against theism. We should all pray that this approach will lead to more cooperation and less conflict in the arena of creation apologetics.