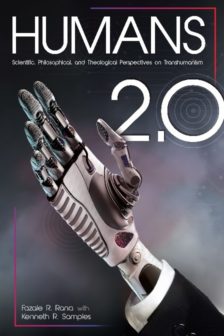 Oh, wonder!
How many goodly creatures are there here!
How beauteous mankind is! O brave new world,
That has such people in ’t
-(William Shakespeare, The Tempest)

We yearn for a day when all disease is eradicated, human power and intelligence transcend our feeble frames, and death is vanquished.

The second coming of Christ? Or an attainable goal of technology? For some it is the latter.

In Humans 2.0, biochemist Fazale Rana and philosopher-theologian Kenneth Samples offer us a glimpse into the current state of human-enhancing technology with a balanced and thoughtful consideration of the philosophical and moral implications.

It is not a simple subject, and the authors do not oversimply. As they explore the idea of “transhumanism”, they focus on three broad areas of research: human genetic modification, neural enhancement, and lifespan extension. Each area is introduced with clear, authoritative technical explanations and an assessment of the current status. The future ramifications are then considered. In each of these areas, technology offers great hope for better health and relief of suffering. In all three domains, there is no barrier to prevent us passing beyond health to enhancement.

I approached the book somewhat doubtfully, wondering “Is transhumanism a paper tiger?” For example, intelligence is determined by not one gene but thousands, and environment still has a profound impact. Enhanced intelligence seems a long way off and may be impossible. Countless such technical obstacles threaten to nullify the transhumanist vision. I also wondered, “Is anyone really pushing this stuff?” I found both concerns satisfactorily addressed. The authors clearly understand the technological impediments to transhumanist visions, but also demonstrate these conversations are happening. They cite the work of ten influential advocates of transhumanist principles, most of them obscure except for 71-year-old futurist Ray Kurzweil.

Chapter 9, “The Problem with Progress”, I would single out as especially insightful and pertinent. Probably the greatest dangers lie in unintended consequences. Neil Postman warned long ago how technology doesn’t merely serve us but changes how we think.[1] Transhumanism would not simply make us better; it would change who we are. “What we end up saving won’t be us.”[2] Nassim Taleb directed our attention to “Black Swan” events – unpredictable disruptions in the course of history that have a profound lasting impact, either for good or bad.[3] Transhumanism looks like a fertile rookery for black swans.

Bringing their sound theological grounding to bear, the authors do an exemplary job of framing the ethical concerns within a solid Biblical framework in a style that is neither dogmatic nor polemical. Professing Christians across the theological spectrum, other than the most liberal or conservative extremes, should find themselves in comfortable agreement. They are unabashedly and consistently pro-life, but not insensitive to the ramifications of that position.

There was one minor point with which I would take issue. Twice[4] the authors warn that transhumanism can only develop with the resources of capitalism (certainly true), that capitalism leads to unequal outcomes (certainly true), and that the technology would only benefit investors and the wealthy (probably not true). They don’t seem to appreciate that most profits in capitalism come from the mass market, or that Henry Ford, Sam Walton, Ray Kroc, and Steve Jobs did not become fabulously wealthy by catering to the rich. We should be far more concerned with this technology in the hands of totalitarian regimes. Far from extending the benefits of freedom, new technology finds increasing use in the service of repression. With human enhancement we might fear more of the same.

Is this book for everyone? Will it change your life? Probably not. Nor is it an apologetic for the Christian faith; anti-theists will take issue with much of the analysis. Non-scientists may wish to skip the more technical sections (the authors even tell you how!) Nonetheless, Kenneth Samples and Fazale Rana have delivered once again with a well-executed analysis of a timely topic. I recommend it highly to scientists, physicians, policymakers, authors, pastors, and anyone in a position of leadership or influence who will be facing these issues, like it or not.

[3] Nasim Taleb. The Black Swan: the Impact of the Highly Improbable. Random House: 2007