Home / The Wrath of Cain 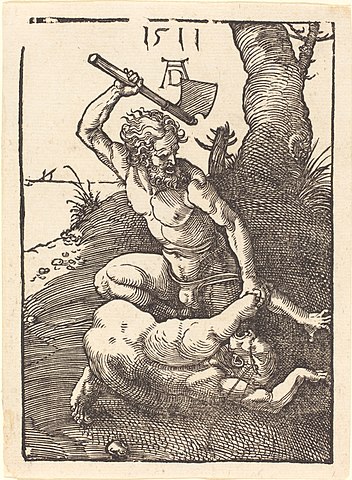 Can you define envy? Is envy bad? Would you know if you had it?

The classic “seven deadly sins” were lust, gluttony, sloth, wrath, pride, greed, and envy. According to the proverb, “a sound heart is life to the body, but envy is rottenness to the bones.” Explain to me, if you can, the difference between greed and envy. In the off chance you haven’t studied Aristotle, this would seem a distinction without a difference. It sounds like counting the same sin twice. Yet there is a difference, and quite an important one. Greed is a desire for more but connotes no malice or resentment toward another. Envy is “to feel displeasure and ill-will at the superiority of another person in happiness, success, reputation, or the possession of anything desirable.” Envy requires at least one other person, who is the object of envy. It may be a desire for the possessions of another, or resentment over another’s success. It doesn’t even matter that the target actually is superior, only that he or she be perceived as such. Envy, as opposed to greed, requires comparison:

Greed: I want a new Ferrari.

Envy: She got a new Ferrari? I hope it crashes.

In the pursuit of greed, one might lie, cheat, injure, or steal from another; but those are means to an end. With envy, one-upmanship is the end. Perhaps now you can understand why the ancients considered envy second only to pride among the most serious vices. Cain harbored envy toward Abel. Envy put Jesus on the cross.

Envy is distinctly common. A 2016 study from Spain engaged 541 volunteers to participate in a series of game scenarios. The scenarios were designed so that volunteers would receive the largest payoff by cooperating with one another, but would suffer a penalty if they cooperated while their partner defected. Based on their performance, the participants were categorized into one of four types: optimist, pessimist, trustful, and envious. Almost one-third exhibited an envious disposition. They were more concerned with minimizing the payoff to their game partner, even when it reduced their own payoff.

The Pentateuch relates an account of hardcore envy leading to disastrous consequences. While wandering in the wilderness, Korah the Levite and Dathan, Abiram, and Oh from the tribe of Reuben accosted Moses. ““You’ve gone too far, because the entire community is holy, every last one of them, and the Lord is with them. Why then do you exalt yourselves above the Lord’s assembly?”

To put this in perspective, first Moses didn’t want the job, and second, he was the humblest man on the face of the earth. Korah demanded to be admitted to the priesthood, a role strictly limited to descendants of Moses’s brother Aaron. Moses explained it was up to God to decide who led, but his attempts at reconciliation were rebuffed. Korah and the rest of the “resistance” started to turn the people of Israel against Moses. The next day Moses gathered the people together, proclaiming:

“By this you will know that the Lord sent me to do these deeds and that it wasn’t my own desire. If all these people die a natural death, or if their fate be that of all humans, then the Lord hasn’t sent me. But if the Lord performs an act of creation, and the ground opens its mouth and swallows them and everything that belongs to them, so that they descend alive to their graves, then you’ll know that these men disrespected the Lord.”

As soon as he finished speaking these words, the ground under them split open. The earth opened its mouth and swallowed them and their households, including every human that belonged to Korah and all their possessions. They along with all their possessions descended alive to their graves, and the earth closed over them. They perished in the middle of the assembly.

The offense of Korah and his allies was envy. Getting swallowed up by the earth is pretty intense. Clearly, in the eyes of God this is a serious matter.

Envy has become a subject of interest among social psychologists in recent years. Traditionally it was regarded as a hostile emotion that prompts deception, limits cooperation, and rejoices over the failure of others. Some began to argue for the existence of “benign” envy, where someone attempts to reduce the difference with someone better through self-improvement. “Malicious” envy tries to level the field by taking down the other person.

A research paper from 2018 by Lange, Paulhus, and Crusius instead found that both types of envy were strongly associated with the “Dark Triad” of personality, particularly Machiavellianism and psychopathy. Both forms of envy cause psychological pain. According to the authors, the pain results from a feeling of inferiority. Inferiority then leads to depression, aggression, and anger toward the fortunate, and happiness when the other person fails. There was a difference in the severity of effect: “benign envy involves subtle social manipulation, whereas malicious envy can extend to blatant aggression.” We can apply this principle to explain the motive of Cain. Having been upstaged by his brother, he became angry, and the anger led to murder.

Recall that the definition of envy is to “feel displeasure” at the superiority of another. It may indeed lead to anger and aggression, but different people react in different ways. Displeasure can also mean discouragement, depression, and despair – and it’s still envy. If we feel resentment over the success of others, or experience disappointment when we compare ourselves, it is envy – just like Cain. We’re simply reacting in a different way because of our circumstances and disposition. The outward manifestation of pride is not always haughty and self-promoting. It may be deep inward pain, with little or no outward expression. The violent ones end up in jail. The depressed ones end up in therapy.