Home / “I Think, Therefore It Must Be True,” Part 2: The Science of Certainty 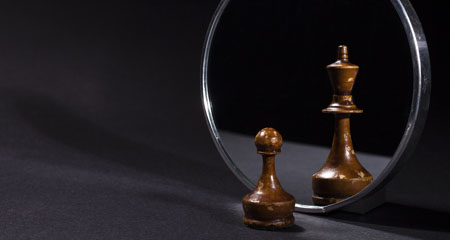 Most of us think we’re smarter than most of us! In a recent large survey, 65% of Americans rated themselves more intelligent than average.[1] [Sounds of unrestrained laughter, barking, and howling – the Spaniel and pals]. Believing we’re very smart, we assume we’re usually right. But is that confidence warranted?

In the course of my medical career, I have known brilliant physicians of many different faiths. Among the most committed adherents, it is safe to say that all were quite sure regarding the truth of their particular faith. But each tradition contradicts all others in one or more matters. They could all be wrong in part or in whole; they cannot all be right. Logically, we must conclude that not only is it possible to be brilliant, certain, and wrong, but that it is common.

In the previous post, we looked at several nonrational factors that can lead to false beliefs: heuristics and biases, emotions, and social influences. We noted that education and intelligence are unreliable predictors of rational thinking.

Yet false beliefs comprise but one side of the coin. The other side, of equal or even greater importance, is the level of certainty attached to those beliefs. Confidence is our estimate of the probability that we are correct. It is a belief concerning our belief—metacognition, in psychological parlance.

The Illusion of Certainty

Ideally, our confidence should be roughly proportional to the mathematical probability that we are correct. In other words, if we are 90% certain, we should be right 90% of the time. But studies repeatedly show that our degree of certainty consistently exceeds our accuracy. For example, people who are “99% sure” are wrong 50% of the time. This disparity both defines and demonstrates the phenomenon of overconfidence. Our unwarranted certainty could be blamed on misplaced trust; that is, by placing too much credence in an unreliable source. However, since we tend to favor sources we already agree with (confirmation bias), excess certainty usually reflects an excessive faith in ourselves (pride).

In his 2009 tome On Being Certain, neuroscientist Robert Burton argued that certainty is not a state of reason but of feeling, influenced by unconscious physiologic processes.[2] Certainty is mostly illusion, Burton argues, and there is considerable evidence supporting this hypothesis.

Overconfidence has been demonstrated and measured in many domains besides intelligence: driving ability, economic forecasting, and medicine, for example. In almost every domain studied to date, significant majorities express a confidence in their abilities far beyond what is warranted, or even mathematically possible. [“Like my distant cousin who somehow still thinks he can catch a car” – the Spaniel].

Sometimes, the least competent people are the most confident, whereas the most skilled and knowledgeable people slightly underestimate their ability. This phenomenon has been dubbed the “Dunning-Kruger” effect, after the original researchers whose landmark paper, “Unskilled and Unaware of It: How Difficulties in Recognizing One’s Own Incompetence Lead to Inflated Self-Assessments,” not only opened a new avenue of research but has prompted many a smile from those who sensed its ring of truth.[3]

Highly intelligent people constitute another group with an elevated risk of overconfidence. Intelligent people know they are intelligent, making them less likely to doubt themselves, respect other opinions, or change their minds. They are also every bit as attuned, if not more so, to social influences that motivate belief.[4]

Highly intelligent people can and do believe crazy things. Sir Arthur Conan Doyle, creator of the ruthlessly logical Sherlock Holmes, was a devout believer in spiritualism and fairies. [“I once knew a Border Collie who claimed he’d been abducted by penguins” – the Spaniel]. Albert Einstein expressed a naïve and unshakeable optimism concerning Lenin, Stalin, and the Soviet Union:

I honor Lenin as a man who completely sacrificed himself and devoted all his energy to the realization of social justice. I do not consider his methods practical, but one thing is certain: men of his type are the guardians and restorers of humanity.[5]

In The Intelligence Trap, science writer David Robson informs us that:

While the popular perception is that intelligent people are naturally skeptical, in fact all humans are believing machines. We drift with the cultural tides, embracing popular ideas on the flimsiest of evidence, then clutch those beliefs tenaciously to protect our egos, strut our virtue, justify our actions, and advertise loyalty to our in-group. This view may seem cynical, but it is well-validated.

There are many strategies for overcoming the “intelligence trap.” They include cognitive reflection, actively open-minded thinking, curiosity, emotional awareness and regulation, having a growth mindset, distrusting the herd, and consistent skepticism. However one habit of mind undergirds all others: an attitude of intellectual humility.

Intellectual humility could be defined as merely having a realistic view of our mental processing; viz., that our knowledge is inevitably limited, our thinking is unavoidably biased, and that even the smartest among us are prone to error.[7]

In recent decades, psychology has embraced a model of personality based on the “big five”: openness, conscientiousness, extraversion, agreeableness, and neuroticism. The more recent version adds a sixth measure: HH, for honesty-humility. Researchers have demonstrated that HH shows a consistent negative correlation with all three elements of the “dark triad”: psychopathy, narcissism, and Machiavellianism.[8] [“We just call that ‘being a cat’” – the Spaniel]. On the other hand, HH correlates positively with healthier traits such as cooperation and self-control.

According to most theologians in the Judeo-Christian tradition, pride is the deadliest sin. Humility is its opposite. It may be tempting to assume this peril concerns only the skeptic, but it’s not just about “them.” It’s about all of us. And the greater the visibility or the higher one’s position in Christian circles, the greater the problem is likely to be.

Scripture repeatedly warns against unwarranted confidence in our own wisdom. Decades of research in cognitive science shows this to be a common human problem that only worsens with intelligence. The antidote begins with intellectual humility, an ancient virtue whose wisdom has been validated by the latest empirical data.

Article also posted (without canine commentary) at Reasons to Believe on August 9, 2018

2. Robert Burton, On Being Certain: Believing You Are Right Even When You’re Not (New York: St. Martin’s Press, 2008).