Home / The Spaniel and I interview Richard Dawkins 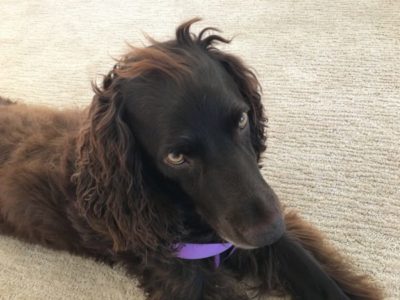 Recently, the Spaniel and I sat down for a two-on-one [imaginary] conversation with renowned atheist Prof. Richard Dawkins. The following is a transcript of our conversation.*

*The answers come from his essay and the accompanying transcript in The Four Horsemen, Random House, 2019.[1] Of course they’re taken out of context – that’s the nature of this genre – but not in such a way as to alter the meaning.

Professor, it is such an honor for us to be with you here today. The Spaniel and I have heard so much about you – but we don’t believe all of it. Dr. Dawkins, are you a spiritual man?

“Religion is not the only game in town when it comes to being spiritual.” [2]

It may surprise some people that you are actually a great fan of the Bible. Why is that?

You seem quite focused on the idea that religion is bad. Is that why you are an atheist?

“My concern is actually not so much with the evils of religion as with whether it’s true. And I really do care passionately about the fact of the matter: is there, as a matter of fact, a supernatural creator of this universe?”[4]

Well, is there a creator of this universe?

“The fundamental constants of the universe are too good to be true. And that does seem to me to need some kind of explanation.”[5]

As you are aware, we have no idea what could have caused the Big Bang singularity. In your essay, you mentioned Lawrence Krauss’s idea that Nothing is unstable so it must produce Something. What do you think of his approach?

“Ignorance is something to be washed away by shamelessly making something up.”[6]

What does that make Professor Krauss?

“It is characteristic of theologians that they just make stuff up. Make it up with liberal abandon and force it, with a presumed limitless authority, upon others.”[7]

I guess we don’t know how the universe got started, do we? How about life? How did life get started?

Well, the biology textbooks suggest it just happened. Isn’t DNA the secret to it all?

“Almost all biology textbooks are seriously wrong when they describe DNA as a “blueprint” for life. DNA may be a blueprint for protein, but it is not a blueprint for a baby. It’s more like a recipe or a computer program.”[9]

Wow. Recipes and computer programs don’t just happen themselves into existence, do they? What else? Are there any other great mysteries that science cannot explain?

“How does brain physiology produce subjective consciousness? Where do the laws of physics come from? What set the fundamental physical constants, and why do they appear fine-tuned to produce us? And why is there something rather than nothing? Science can’t answer these questions.”[10]

With all these unexplained fundamental questions, it must be hard maintaining one’s faith as an atheist….

“The human mind, including my own, rebels emotionally against the idea that something as complex as life, and the rest of the expanding universe, could have ‘just happened’.[11]

Emotions can throw us, for sure. So you’re sticking with the ‘just happened’ bit for now?

It takes intellectual courage to kick yourself out of your emotional incredulity and persuade yourself that there is no other rational choice.”[12]

You’re a brave man, Prof Dawkins. It must have been very risky to come out as an atheist at Oxford. (“About as risky as licking yourself when nobody can see you” – the Spaniel). Now, you’ve clearly gone on record that no one can disprove God’s existence. You just think it’s improbable. Could you elaborate on that a bit?

“A creative intelligence capable of designing a universe would have to be supremely improbable… However improbable the naturalistic answer to the riddle of existence, the theistic alternative is even more so.”[13]

Could you explain to us how you calculated the improbability of God?

That’s OK, professor. We all have our limits. So, with all those questions that science cannot answer, what’s your advice to people? Should we accept on faith that consciousness, life, and the universe came into existence out of nothing?

“Whether it’s astrology or religion or anything else, I want to live in a world where people think skeptically for themselves, look at evidence….if you go through the world thinking that it’s OK to just believe things because you believe them without evidence, then you’re missing so much.”[15]

I couldn’t agree more. Dr. Dawkins, this has been a very enlightening conversation.

“I think we’ve had a wonderful discussion.”[16]

Before we close, the Spaniel has a few questions he’d like to ask…

“Unfortunately, we’re running out of time”[17]

Do you have any questions for “Dr. Dawkins” or the Spaniel? Please enter them in the comments section below. And don’t forget to subscribe so you’ll be automatically notified of future postings!

[1] The Four Horsemen: the conversation that sparked an atheist revolution Random House, 2019